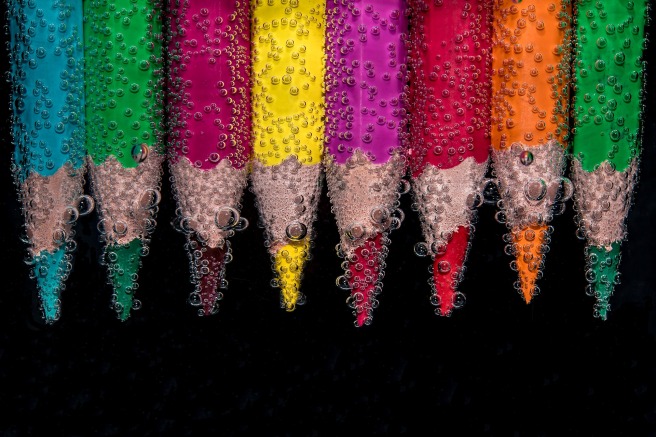 Last night while my husband and I were brushing our teeth, the topic of coloured pencils came up.  There is a proper name for these colourful, graceful beauties, but it was not a name that my husband and I could agree on.  If you have ever had a spirited discussion while trying to brush your teeth with an aggressively loud and cumbersome electric toothbrush, you will know that the entire experience is as wild as it is exhilarating.  Add to that the fact that my husband and I are both embarrassingly stubborn, and you have yourself party!

Not only could we not hear each other over the incessant buzzing, brushing and running water, but we had to dodge spit, toothpaste splatter, and wildly gesturing hands that made no more sense than our mumbled, frothy words.  It was like an out of control sporting event where rioting fans stormed the field and tried to cause as much shit as they could before finally being hauled away by security.

I promise you though, as insane as this sounds, it’s moments like this that bring my husband and I closer together.  Eventually.  But only after the spitting and hysterics die down.  Then we go back to behaving like the mature and responsible adults that the rest of the world thinks we are, and we wonder why we were ever disagreeing in the first place.

I had one job to do last night.  One simple job!  A fairly run of the mill parenting duty that could have been handled in under a minute, but somehow took 10 times that long, and resulted in me feeling flushed with frenzy and panic while I belly crawled down the hallway in the dark.

Let me back up a bit.

Yesterday evening my son, who is nearly 7, lost a tooth (his third to date).  Our family’s anticipation and build up to the Tooth Fairy’s arrival was fantastically impressive.   The entire house was buzzing with excitement as we tucked the children into bed last night, and everyone had a different idea about what the Tooth Fairy would bring.  My oldest son, the one who lost the tooth, was hedging his bets and anticipating a boomerang or a coin (go big or be practical seems to be his motto lately).  I was covertly checking my wallet to mentally prepare myself for what was actually going to end up under his pillow, while my husband stood quietly by, amusement crinkling the lines around his eyes.

It was close to midnight by the time my husband and I finally decided to call it a night.  I had been on the computer for a while before we headed up to bed, and if you have ever spent any time in front of a bright screen before walking into a dark room, you will know that your eyes simply will not adjust to the darkness.  You are blind, and it lasts for a really, really long time.  It doesn’t help when your children have blackout blinds and zero nightlights, which is the case in my son’s bedroom.

So this was where my eyes were at when I stepped into my son’s room.  With the Tooth Fairy’s coin clutched tightly in my hand, I turned off all the lights upstairs, opened his bedroom door and…nothing.  I couldn’t see a thing.  I took a tentative step forward, arms stretched out and sweeping the air in front of me.  Within seconds my shin bounced off the edge of a toy bin, and I groaned, reflexively before dropping to my knees.  I then proceeded to crawl, pitifully in the general direction of my son’s bed.  Once my face hit the side of his mattress, I knew I was there.  That’s when things went from bad to worse.

At this point, I still couldn’t see, but at least I knew roughly where I was.  I crouched as low as I could, curled my fingers tightly around the coin, then reached up and quickly slid my arm across my son’s bed towards his pillow.  Except it turned out I wasn’t anywhere near his pillow, so I ended up punching him in the stomach.  Horrified, I dropped back down to the floor and wiggled half way under his bed.  Sheets rustled, bed springs creaked, but eventually my son settled back to sleep.  I crawled out from my hiding spot and carefully inched my way to the head of his bed.  This time I found his pillow, made the tooth exchange, then began my hasty retreat.  My vision was slowly returning at this point, so I could just barely see the outline of the door.  I was scurrying towards it when suddenly I heard someone whisper, “Hey!”

I dropped flat to my stomach and began shimmying frantically out of his room and down the hallway.  I made it to my bedroom, scampered across the floor and threw myself into bed.  I explained, breathlessly, to my husband that I had just sucker punched our son, and likely caused permanent Tooth Fairy Trauma that was going to take years of therapy to sort out.  My husband, being the reasonable, practical person that he is, calmly turned to me and said, “Why didn’t you just walk in his room, give him a kiss on the forehead, then swap out the tooth?  If he woke up, you would have the perfect excuse for being there.”

It’s moments like this that I really begin to question my qualifications as a parent.

Late last night, long after the kids had been tucked up snugly in their beds, my husband and I found ourselves draped across the couch, drifting lazily off to sleep as the last few credits of the movie we had been watching trailed slowly off the screen.

“We should go to bed,” I mumbled, sinking deeper into the couch.  “The kids will be up early tomorrow to hunt for eggs…”  I paused, something niggling at the back of my brain.  I blinked thoughtfully and rubbed my eyes.  Then it clicked.

“THE EGGS!” I exclaimed, jumping excitedly off the couch.  “I need to hide the eggs!!!”

Dennis’ head, which had be resting on my shoulder, dropped awkwardly onto the couch.  He groaned.

“Ohmigod, ohmigod, ohmigod!” I squealed, as I skipped across the room to grab my basket of eggs.  “This is my absolute favourite thing in the world!!”

“I thought I was your favourite,” Dennis said hopefully from under a cushion.  I grinned, then scooped up a handful of eggs and dashed across the room.

I spent the next fifteen minutes frantically hiding deliciously wrapped eggs, all the while being sent into fits of giddy delight by the overpowering smell of chocolate.  When I was done I dragged Dennis off the couch and ushered him upstairs.  There was one final thing to be done before bed.

The kids had each left an empty Easter basket outside their door in hopes of finding them filled with a surprise by morning.  I tiptoed, breathlessly, toward the baskets and carefully placed something special in each one before darting ninja-style into the bathroom.  Dennis peered curiously at me over his toothbrush.

This morning the kids dragged us from bed before the sun was fully up, and began the egg hunt in earnest as Dennis and I shuffled sleepily downstairs, rubbing the remaining sleep from our eyes.  It took the kids about as long to find the eggs as it did for me to hide them, which has already inspired me to up my game for next year.

The rest of the morning passed in a sugary haze, with the children buzzing from room to room riding out their chocolate high.  As for me, last night’s excitement has left me glassy-eyed and a little punchy today, which would explain the coffee binge that currently has me plastered to the ceiling.  It’s probably a good thing that Easter Egg hunts happen only once a year, because I’m not sure I have what it takes to handle this kind of excitement more often than that.

Last year our dishwasher died.  It was a very long, drawn out and dramatic death, likely brought on by lack of love and attention (we failed to notice that it was leaking, and in dishwasher-land, apparently that’s a bad thing).  When my husband and I finally realized what was happening, we had no choice but to drop everything and spend the day frantically shopping for a new one (if you have kids, shopping for a dishwasher counts as “date night”, so we made sure to wear our fancy clothes).

We took our time, strolling hand in hand through one store after another (most of which, to be honest, didn’t even sell dishwashers).  We were starved for some proper adult time, and it would seem that this was quickly becoming our version of a night on the town.  Seven stores and several cups of coffee later, we finally found the dishwasher of our dreams.  I think I may have even whispered, “It’s just so dreamy!!!”  My husband and I haggled over the price, using our best haggling voices and wiggling eyebrows, but that got us absolutely nowhere, so we gave up and bought the dishwasher anyway.  Not one of our proudest moments, but remember, we were in our fancy clothes, so at least we looked fabulous while trying.

The new dishwasher was delivered a few days later.  The kids and I gathered excitedly in the kitchen, waiting for something magical to happen.  We giggled and fell over each other, clambering for the best spot.  It was around the time when the installation guy began to unhook all the wires under the old dishwasher that my oldest son turned to me and whispered, “I’d like to give that guy a quick hug….before disappears into the dishwasher forever.”  Startled, my thoughts scattered and tripped over one another, searching desperately for some sliver of parenting advice on how to proceed.  Was I supposed to address the super obvious “We Don’t Hug Strangers” aspect of the situation?  But what about the “That’s the Freakiest Fucking Thing my Kid has Ever Said to Me” side of things?  It was confusing, but I finally decided that, “Let’s settle for a high five, and wish him luck, okay?” was the appropriate compromise.

In the end, the installation guy survived, my son got his high five, and I got my dreamy new dishwasher.  Life has quieted down since then, but I find myself eyeing the oven every now and then.  It hasn’t been pulling its weight lately, and I could really use another excuse to put on my fancy clothes.